Way to kick a girl when she's down.. 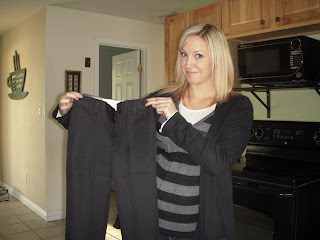 So funny story, thought I would share. I ordered some maternity clothes from a certain retail store, online. Now, when you are rapidly gaining weight and things are getting tight you are in a bit of a vulnerable spot in your life, so I was pretty mortified when the black pants that I ordered came in the mail and looked like they would fit Nicole Ritche. All the reviews said that they fit true to size. Sadly I actually tried to try them on! (Maybe they were very stretchy?) no go. This is when I realized that the tag on these babies didn't match what I ordered. I was trying to squeeze my preggo belly into their child line black pants! Sad trick to play on a pregnant girl.....
Posted by quinn and kristi at 3:58 PM 9 comments:

It's a love hate relationship... 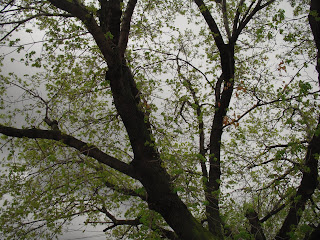 I adore Utah in the Spring, the budding leaves... 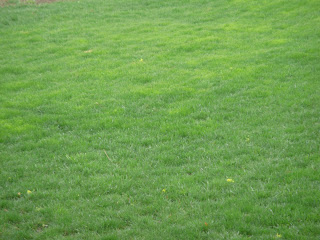 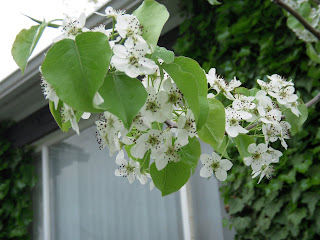 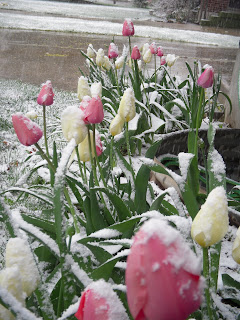 And then the next day snow!

I love Utah. It's a great place to be. But the weather here? Kinda horrible. I'm not really a cold person so the spring is just a bit tortuous for me. Gorgeous one day and then snowing the next. Will it make up its mind already? !!
Posted by quinn and kristi at 3:35 PM No comments: 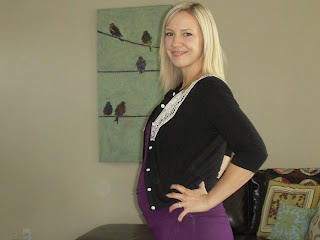 Six months!!! aagh! Time is flying! I must admit I kinda love this bump (not the weight going along with it, mind you). I love that I can see it bounce now when she kicks, and feel her rolling around in there like its her own personal space. Quinn is still the only one who has felt a kick though. Lila is a little shy around those who aren't her parents. Kinda funny. Whenever I tell Quinn to come feel she is quick in her kicking response, but I think everyone else thinks I am making it up cause she never kicks their hands. Just a few more months....
Posted by quinn and kristi at 4:21 PM 5 comments: 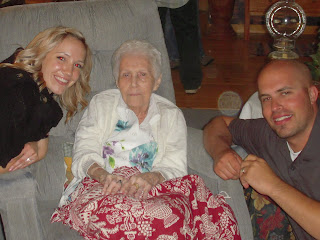 The last photo that I have with my sweet Grammy 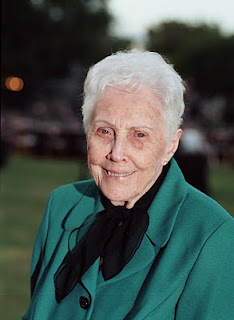 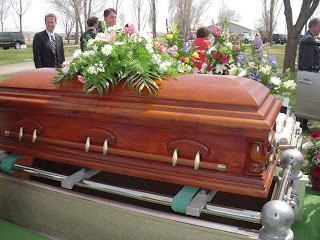 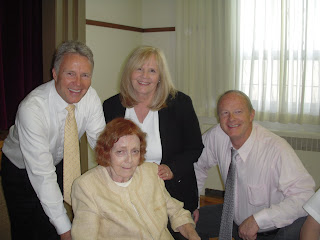 All of her Kids. Gary, Pam, Patti, and Scott 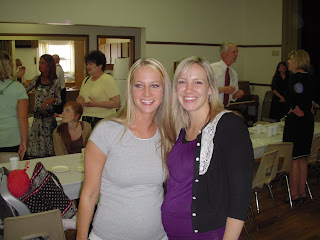 My Preggers Cousin Jenna and I. You can't even tell! (I wish I had got more pictures of my great cousins. ) 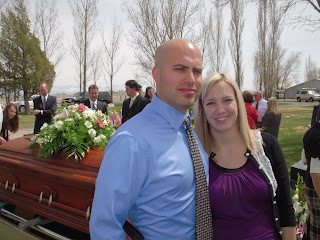 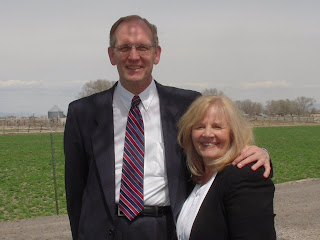 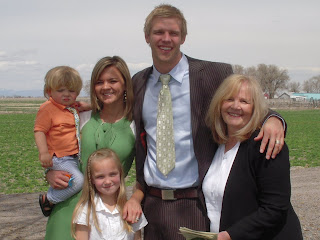 I didn't get a picture with Kelli, Hen, Ben, Evie and Matt. It was nice my family was there (we missed you Ali and Boys! ) 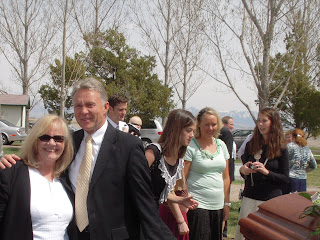 My Sweet Grammy passed away on April 11th at the age of 94. Grammy was the biggest sweetheart! There was just something so special about her. She always made you feel like you were her favorite grandchild. I was lucky enough to go down two weeks ago and say good-bye to Grammy. I was in Arizona and my mom said that she didn't think that Grams would make it much longer so I changed my flight to Vegas. I am so grateful that I did! Those few hours with my Grammy were so precious. I was able to chat with her, hold her hand and kiss her before she went to meet her sweetheart Ben and her son Hal in the next life. She was kind, funny and just as sassy as she always was. I will always cherish those last moments with a wonderful lady. She talked of meeting Lila and how excited she was, perhaps they are getting to know each other now.
Some of my favorite memories of Grammy is freshly baked bread, the candy jar, her jewelry ( I know where my love of the gems come form!) her kisses, her encouragement, her stories, the relationship with her sweetheart, her two minute phone calls, her love of the gospel, her welcoming spirit and her exclamations of "oh for fancy!" or my absolute favorite, "oh for snazzy!" She was so sassy, she always let you know what she was thinking, whether that meant she was telling me I was beautiful three times in an hour or whether she didn't like that fact that I had pet rats as a child. (I loved how she use to squeal when I brought them out to show her) But she always did everything with love. I can't even count the times she told me, "you are just perfect the way you are!"
I was so blessed to have such a wonderful woman in my life. I know why my mother is so incredible is partially due to this great woman. Quinn was looking at her obituary and said, hey did you know you have your Grammy's lips? I was so honored and thrilled that a bit of Grammy was in me. She was such an amazing woman. I will miss her but I am thrilled that she is no longer in pain and reunited with the love of her life!

Manon Hawley Robison 1/29/1916 ~ 4/11/2010 Our beloved mother and grandmother, Manon H. Robison, age 94, passed away peacefully in St. George, Utah on April 11. She was born January 29, 1916, at her home in Oasis, Utah, to Sims Matheny and Arizona Church Hawley and was the youngest of nine children. Her older sister loved opera and chose the name "Manon" from a French opera singer. When she was 11, her father passed away with multiple sclerosis. Her mother worked very hard to take care of the family through the Great Depression. When Manon was in 9th grade, she went to Hinckley High School where she met Ben Robison. He was class president, and she was vice president so they became friends and dated off and on through high school. After high school Manon went to LDS Business College, and then worked for a cousin in Los Angeles, California. Ben went to BYU and was then called to the Western States Mission. When he got home from his mission, he and Manon got back together and were married in the Salt Lake Temple on September 8, 1939. They lived in Hinckley until 1945 when Ben joined the Marine Corps and left for San Diego. Manon and their two children later joined him, and they lived there for a few months. By then the war was over so they moved back to the Delta area, buying a farm and home in Sutherland where they lived for 34 wonderful years. Life was busy with five children and a home to care for, farming to do, cattle to raise, and church callings to fulfill. Manon served in several positions in the Relief Society and Young Women's. It was a wonderful place to raise a family, and her family was her life. In 1978, she and Ben were called on a mission to New Zealand to be director of the Visitors Center in Hamilton. In 1981 they moved to Salt Lake City where they worked in the Jordan River Temple for eight and 1/2 years. In 1992 they moved to beautiful, sunny St. George and worked in the temple there. They enjoyed traveling and went all around the world on different cruises. Ben passed away May 28, 1998. Manon loved her family and the gospel and enjoyed reading and sewing and crocheted over 100 afghans to give to family members. She has 21 grandchildren and 45 great-grandchildren with more on the way. - A wonderful life!!!! She is survived by her children: Pamela (Ellis) Hamblin of St. George; Patti (John) Thomson of Salt Lake City; Gary (Patty) Robison of Mesa, Arizona; and Scott (Marilu) Robison of Delta; and her many grandchildren and great-grandchildren. She was preceded in death by her husband: Benjamin H Robison; a son: Benjamin Hal Robison; great-grandsons: Michael Hamblin and Dillon Robison, and all of her siblings. Services will be held on Saturday, April 17, 2010, at 1 p.m. in the Sutherland Chapel at 2500 N. 3000 W., Delta. Viewing at the church at 11:30 a.m. Burial will be in the Sutherland Cemetery under the direction of Nickle Mortuary.
Posted by quinn and kristi at 6:26 PM 6 comments:

St George with the Kimball girls ... 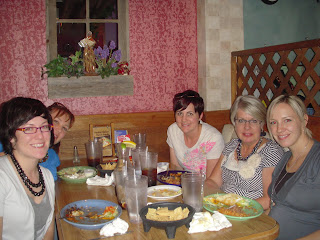 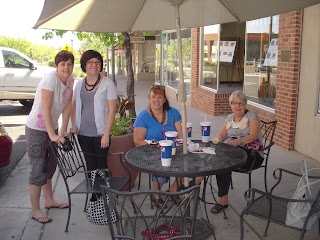 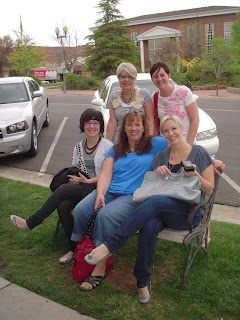 My mother in law Robyn invited the girls down for a little get together in St.George. We had a lot of fun. We ate at bear paw cafe, so yummy! Then I got a massage while they got pedicures. Heaven! Then we went shopping all day and finished it all off at at Paula's. It was really nice to spend some quality time with the ladies. I had to cut my part of the trip short but I was grateful for the time I had with them. Thanks!
Posted by quinn and kristi at 6:08 PM 2 comments:

I have been feeling baby Lila kick since week 16 but last night (in week 22) was the first time Quinn could feel her kick. It was so fun. We were reading in bed when I felt some pretty good kicks. I grabbed Quinn's hand and put it on my belly. Right on cue little Lila gave a great big kick. Quinn's eyes got huge along with his smile and he just kept saying, Oh my gosh! I just felt my baby! It was a great little moment. I can't believe I am over half way in this pregnancy. It is flying by! She will be here before we know it!
Posted by quinn and kristi at 8:32 AM 9 comments: