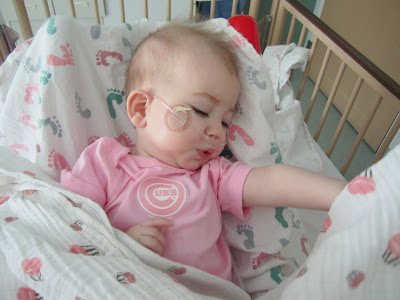 I asked Quinn to bring Little Miss some clothes for the hospital. Any surprise that this is what he brought? 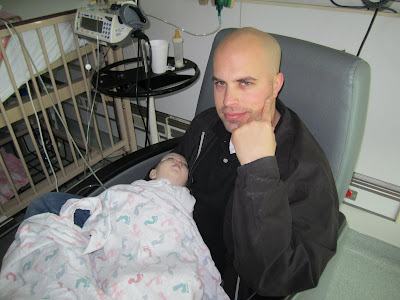 This week was pretty hard. We got out of the hospital on Tuesday, unfortunately the feeding tube is still with us. It's a bit bitter sweet for me, I was dying to get out but now I feel like we don't have the staffs attention. And yet maybe that is a good thing. I was shocked by how much the doctors and nurses just suggested life altering syndromes in a very insensitive manner. I heard several diagnosis that were equally horrible. So far all the tests that they did are coming back normal. At this point Lila has been tested for literally hundreds of things. They haven't found anything yet.
This whole experience with Lila has been extremely difficult. I have never felt so sad and scared. But during this week I did realize that a couple of good things have come from this. I love this little girl so much, I will never take for granted what she is going to accomplish. Every tiny smile, coo and laugh, even if it is infrequent is completely treasured and appreciated. She has taught me what really matters in life. All the other things that I use to worry about seem very trivial now. She is beautiful and I adore her no matter what. I will never take for granted a healthy child. If we are lucky enough to get the pass from genetics and we get to have another baby and they are healthy I will feel like I have won the lottery.
I also came to a realization what an amazing husband I have. I knew before, but this whole experience has made me so grateful for Quinn. He is amazing. This valentines day spent in the hospital was one of the most romantic in that I came to know how lucky I am to have this partner in life. Quinn has shown me the true meaning of love. Not the Hollywood mushy type but real true love. He has held me as I cried and reassured me. I know that whatever we face if he is there then we can do it. I am constantly amazed by his patience, his strong faith and his love for a wife that by all accounts is not very fun to be around these days. I don't know how I got so lucky. I don't think I could survive this with anyone else. I love you so much Q. Thank you. Thank you for being so strong, for having the faith that I lack and for being my rock. I'll make it up to you some day. 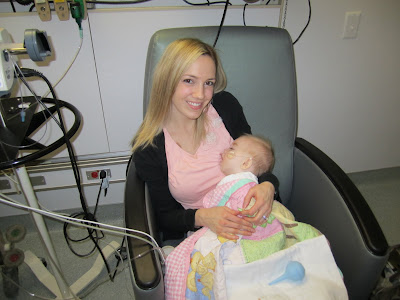 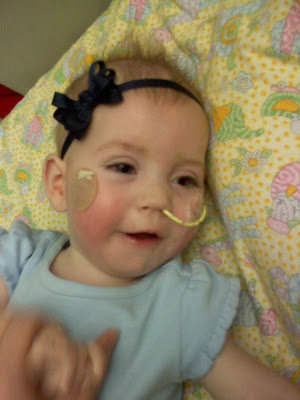 We are still here. Lila is feeling a bit better though. Not so much suction and off oxygen finally. Unfortunately our old nemesis the feeding tube is back in. They may send us home with it. I really hope that this doesn't turn into a long term thing.
This has been a really hard hospital stay, since Lila has been in here the neurology team has decided to take advantage and run a ton of tests. She had another EEG, a spinal tap, blood and urine taken, an ophthalmology exam, x-rays and more. The only good thing is that I finally feel like we are getting attention. Our neurologist has come up to see us every night and has been really helpful and available. The scary thing is that he is throwing out some pretty devastating syndromes. Her EEG was a little more abnormal (who knows what that means) but all the other tests have been coming back normal. There have been a lot of tears this week.
Lila is a sweetheart through it all. She has become a favorite of the nursing staff. They brought her a balloon. We love this little girl so much, she has a way about her of touching people's hearts.
Posted by quinn and kristi at 7:30 PM 4 comments:

Lila's first Valentines day was spent at Primary Childrens. We are still here actually. Lila has RSV, pneumonia, and double ear infections. This poor baby! She has the worst Luck, but what a little sweetheart. She has been poked, prodded and suctioned out and is still just a little trooper! They don't know how long we will be here but she is sleeping a ton and recuperating.
Thanks to everyone who has supported us! Thanks for the texts and prayers. Obviously Kelli and Anya know how to help me cope, they both brought baked goods. My mom stayed for seven hours to keep me from getting too sad. Thanks to parents and siblings who have come to keep us company. You guys are awesome. Thanks to Ian, Ann, Daphne and Ty who spent a romantic night at the primary cafeteria for Valentines with us. That is kinda hilarious.
We love you baby Lila! You are our best Valentine!
Posted by quinn and kristi at 4:46 PM 5 comments:

Quinn has mentioned that I seem to be pretty pessimistic on this blog. I feel really bad about that. As hard as this whole ordeal has been I feel so blessed to have Lila. She is the sweetest little thing. She is beautiful. She is such a gift.
Today I get to write something positive. I have been feeling pretty down about Lila's vision, she had an amazing vision therapy session last week, where the vision therapist was so excited and encouraged but since then I feel like we have taken a step back. So today while Lila was laying on her back sucking on her hands I knelt down and just smiled at her, didn't make a sound, and a small little smile emerged. I started laughing and Lila's smile got huge! But then I started sobbing and she started to look a little confused : ) Of course now I'm thinking back, did she really see me? Did she just hear me? I don't know, what I do know is that I saw the most gorgeous smile from my baby girl today. It was a good day.
Posted by quinn and kristi at 2:17 PM 4 comments: 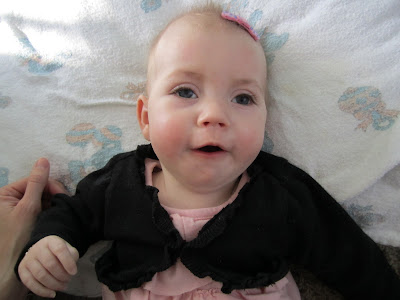 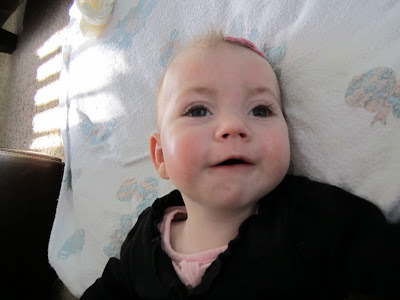 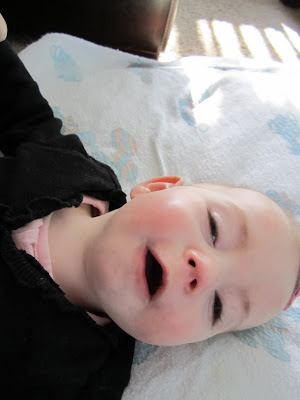 I LOVE this face! I LOVE this little voice!
Posted by quinn and kristi at 3:04 PM 4 comments:

The difference between men and women 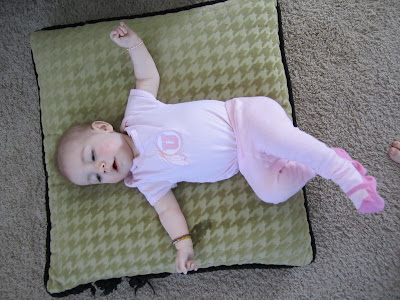 One day after church I asked Quinn to take Lila out of her church clothes and put her in some comfy clothes. This is what he came back with. A short sleeve Utah onesie with her tights that had apparently become pants. Not an outfit I would have chose, let alone thought of. I thought it was pretty funny.
Posted by quinn and kristi at 2:53 PM 4 comments:

So this week has been extremely frustrating. On Monday I got the test results from my pediatrician that the EEG was abnormal. So what does that mean? She didn't know. So I called frantic to primarys to talk to our neurologist, they said he can get back to you in 24 hours. Luckily I have my dad. He interpreted the results and said it's abnormal because Lila may have a tendency to have seizures. That was the reason they gave insurance to justify the test. He also said not to worry to much about it. My brother also tried to warn me (they are both amazing physicians) that an abnormal reading may not mean anything, kids brains are changing all the time, in fact it's pretty easy to get an abnormal reading when they are this young and when nothing is wrong. So I was feeling uncomfortable that it was abnormal but not panicked.
Then came Tuesday, a nurse from our neurologist called. She said that there are three reasons to have an abnormal reading, 1-you are having a seizure 2- you have the tendency to have seizures and 3- you have a sick brain and there is nothing we can do. She explained that Lila has abnormally slow brain wave once in a while when she sleeps. I asked which category does that fall into? She answered the sick brain category. Sobbing, I asked what else we could do? Where there other tests to see if my baby has a sick brain? She said nothing comes to mind, but I'll have the doctor call you.
Now I was hysterical. All the good info my dad and brother gave me went out the window. I know that's horrible but it's a little hard when someone says your kid has a sick brain and there is nothing we can do. So I started calling primarys everyday, asking to talk to the doctor. I also started to call genetics everyday to make sure that we are testing for what the doctor wanted us to (that's a whole other story, no one can tell me that the right tests have gone out for that syndrome either) No one has called back!!!! It's been a week! I haven't gotten anything. I call everyday and no response. Not one person has even acknowledged my existence. In the meantime I have researched slow brain waves while sleeping, it could just mean epilepsy. We can handle epilepsy. That doesn't mean sick brain, nothing we can do. I'm not just frustrated at this point, I'm mad!
What can I do? Any advice from mom's who have had to do the primary testing drama? I feel so helpless.
Posted by quinn and kristi at 6:26 AM 7 comments:

abnormal
Posted by quinn and kristi at 3:17 PM 9 comments: