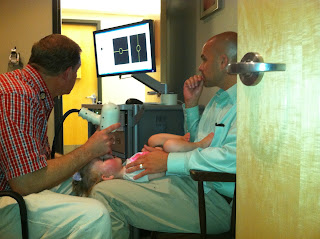 I guess the only good thing about Lila  having such a rare condition is that she is very fascinating to doctors and they want to get to know her better.  So we headed up to the Moran Eye center today to look more closely at her eyes. Lila has retinal albinism but she doesn't have the normal nystagmus (involuntary eye movements, due to reduced vision) that a lot of people with albinism have.  So poor little miss was poked and prodded for two hours to get good pictures of her eyes.  I felt so bad! This was the hardest I have seen Lila fight. She was pushing away, deep sighing, and tensing her little body. Finally, and amazingly, she gave up and went to sleep. Even with them pulling her eyes open she stayed asleep (a miracle) and they got ONE decent picture.  The picture showed that Lila's eyes look better than the average person with albinism. Worse than the general population but better than some of her peers. They guess then that Lila can see images.
All day I have been thinking back to when Lila was around four months and her Grandpa gave her a blessing and said that "she would surprise the doctors with how well she did." At the time I thought that meant our little girl would walk into primary's one day and make the rounds to all of her specialist, showing off the fact that she was completely normal. As time went on and that wasn't the case I became so frustrated. Now I realize that little miss is going to do well in her own little sphere. She is doing so well for a Vici child. We are blessed for smiles and for brief moments of eye contact followed by a smile (those are my absolute, hands down favorite moments in life) and laughter.
Posted by quinn and kristi at 12:07 PM

I love you Kristi! Thank you for your sweet perspective today! I absolutely loved it!

What a trouper, Lila!

Yay Lila! That is no fun but great news.

Lila is such an amazing child!

Can't get enough of that girl. Getting excited for her birthday!

Love that girl and can't get too much of your updates. Can't wait for her birthday!